NEW YORK (U.P.) Literary tastes differ among leading authors and editors of the United States, according to a symposium collected by the United Press. A number of prominent writers were asked to name three recently published books particularly to their liking. Their selections follow:

H. L. Mencken, editor The American Mercury: The Messiah Jesus and John the Baptist, by Robert Eisler; The Mysterious Madame, by C. E. Bechofer Roberts; The Work, Wealth, and Happiness of Mankind, by H. G. Wells.

Chrigtpher Morley, novelist and critic: The Tragedy of Henry Ford, by Jonathan Leonard; Kamonga, by Homer W. Smith; And Life Goes On, by Vici Baum.

George Jean Nathan, critic: Essays In Persuasion, by L. M. Keynes: The Story of My Life, by Clarence Darrow; The Puritan, by Liam O’Flaherty.

Ben Hecht, novelist: “It’s no body’s business what I read.

Harry Elmer Barnes, author and critic: Only Yesterday, by Frederick Lewis Allen; The Story of My Life, by Clarence Darrow; Is Capitalism Doomed? by Dennis

Celebrating the 300th birthday of his relative Benedict Spinoza (1632 – 1677) saw Benjamin DeCasseres release two volumes about the man and his work. The first was Spinoza: Liberator of God and Man in 1933, and the second was Spinoza Against the Rabbis in 1937. This new edition combines them both for the first time, newly typeset and designed. DeCasseres brings to the light in this book hitherto unknown aspects of the doctrines of Spinoza: his liberation of God from the shackles of anthropomorphism, his glorification of the Will-to-Power, and his divinization of the Ego of the individual man. In the chapter entitled “Anathema!” DeCasseres has with a dramatic power only equaled in the pages of Victor Hugo or Merejkovsky pictured the excommunication from the Jewish Church of Benedict de Spinoza.

Paperback edition available on Amazon.com, Amazon UK, or directly from the publisher.

Philosopher Turns to New Credo in “War on Collectivism”

NEW YORK, Aug. 10 (A. P.) Benjamin DeCasseres, philosopher and descendant of philosophers, turned today from his abstractions to what he termed “a fighting political realism in the defense of American liberty.”

“I purpose from now on,” he said, to use all my forces in battling for the preservation of the American-British-French ideal of civil liberties against Communism, Fascism, Nazism or any form of collectivism that ties the individual to the Juggernaut of a dictatorial State.

“The difference between Communism and Fascism is a difference in stench.” The descendant of Spinoza, great Dutch philosopher of the 18th century, turned his back on the philosophers of antiquity and modernity.

“I have hobnobbed with Buddha and Aeschylus, Plato and Schopenhauer, Spinoza and Nietzsche, Victor Hugo and Baudelaire, Goethe and Heine, Montaigne and Whitman, Hegel and Keats, Thomas Hardy and Dostoievsky,” he said,”–in fact, with the whole earth brain trust.

“I salute them in temporary farewell, walk down Olympus into Independence Hall, roll up my sleeves, carry the Liberty Bell up to the tower—and ring it till it either cracks to dust or until I die.” For his battle cry DeCasseres has taken a new American credo, culled from the men he considers the great type American political leaders—Benjamin Franklin and Thomas Jefferson.

“I believe with Benjamin Franklin that any nation that exchanges its liberty for security is not worthy of either.”

“All my life I have divided my spiritual, mental and emotional activities between Olympus and Independence Hall.”

“Today I leave Olympus, except for short visits, and move, bag and baggage, into Independence Hall and Monticello.” DeCasseres said he considered that “there is a mighty war being fought now in every country in the world.”

“It is individualism versus collectivism; freedom versus reactionary totalitarianism.”

“I shall advocate individualism against all forms of standardized stagnation, sterile conformity, beehive Socialism. Communism and the efforts of capitalism to monopolize the necessities of life.”

“The most brutal form of capitalism is the totalitarian State: Russia, Germany and Italy.”

The philosopher, although he has turned from thoughts to deeds, insists on the rational approach to action.

“Every American worthy of the name,” he said, “should know why he is an American.”

“And having found out that this greatest deliberate experiment ever made in human liberties, with all its attendant faults and corruptions, is the superior politically of any other Government that has heretofore appeared on earth, he should be prepared to risk everything to save it from the threatened universal catastrophe of the superstitious belief that the State is a miracle machine.”

The editor-in-chief of UnionOfEgoists.com and owner of Underworld Amusements has pulled a small stack of desirable new and used items from his personal collection and has listed them on ebay starting at $6.66. Every book listed is worth well more than that, some tens, some hundreds. He’s funding a secret project and you can be a part of that just by buying yourself a book. 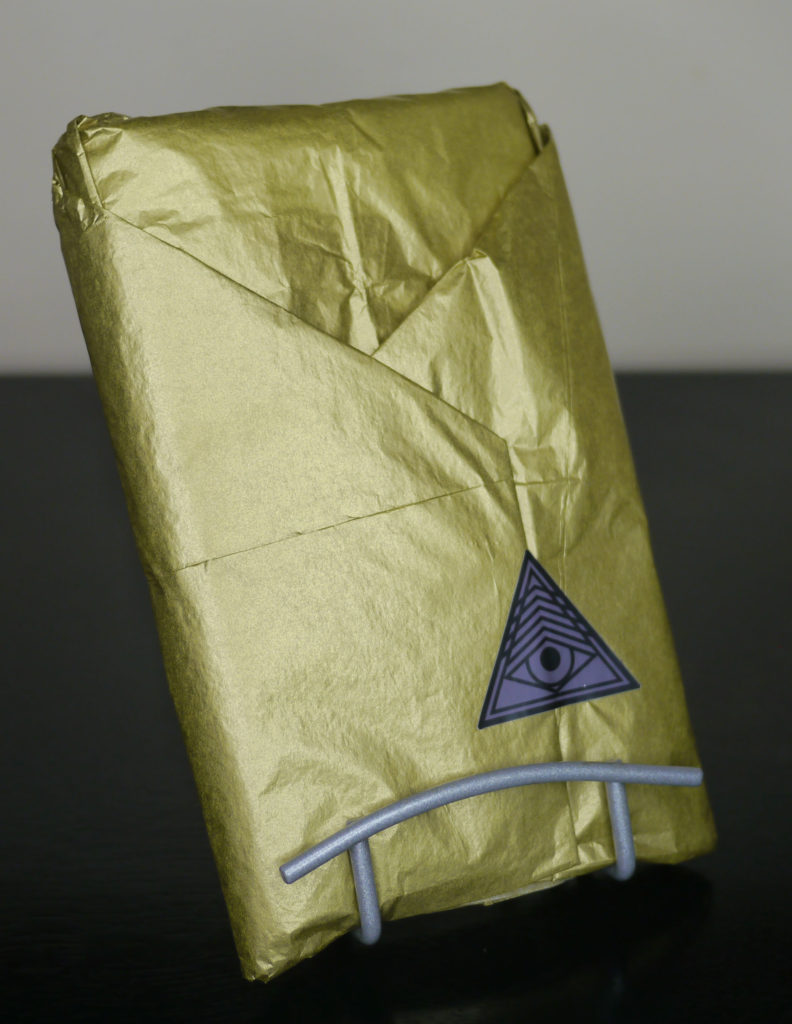 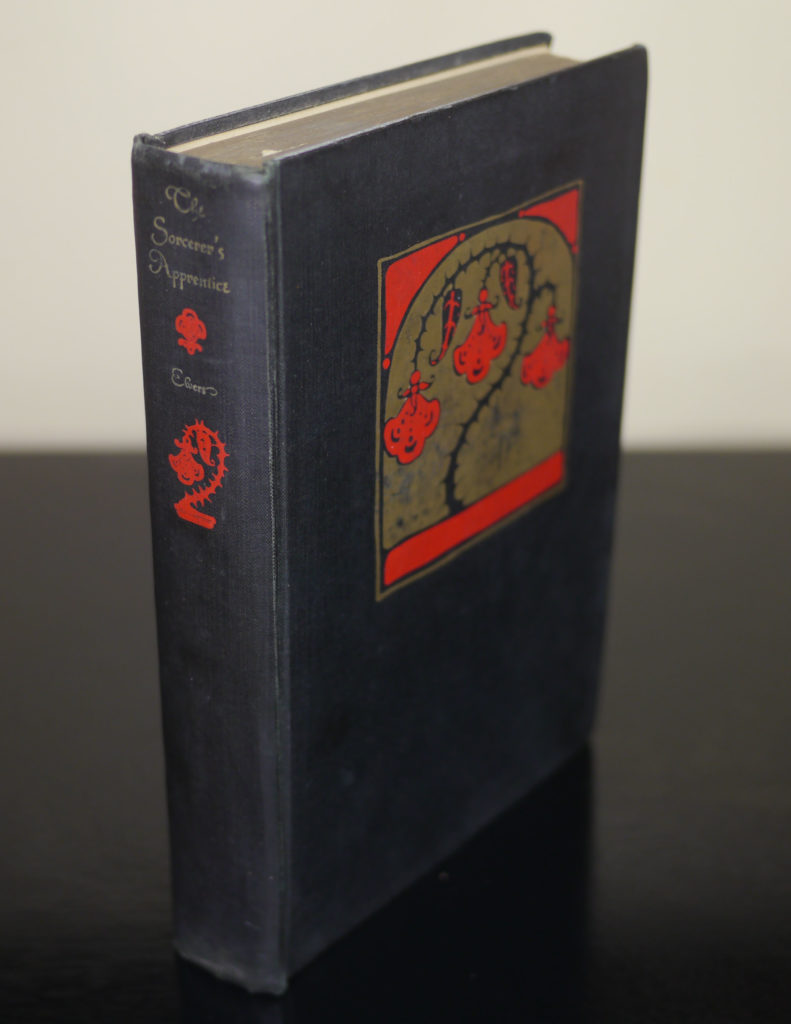 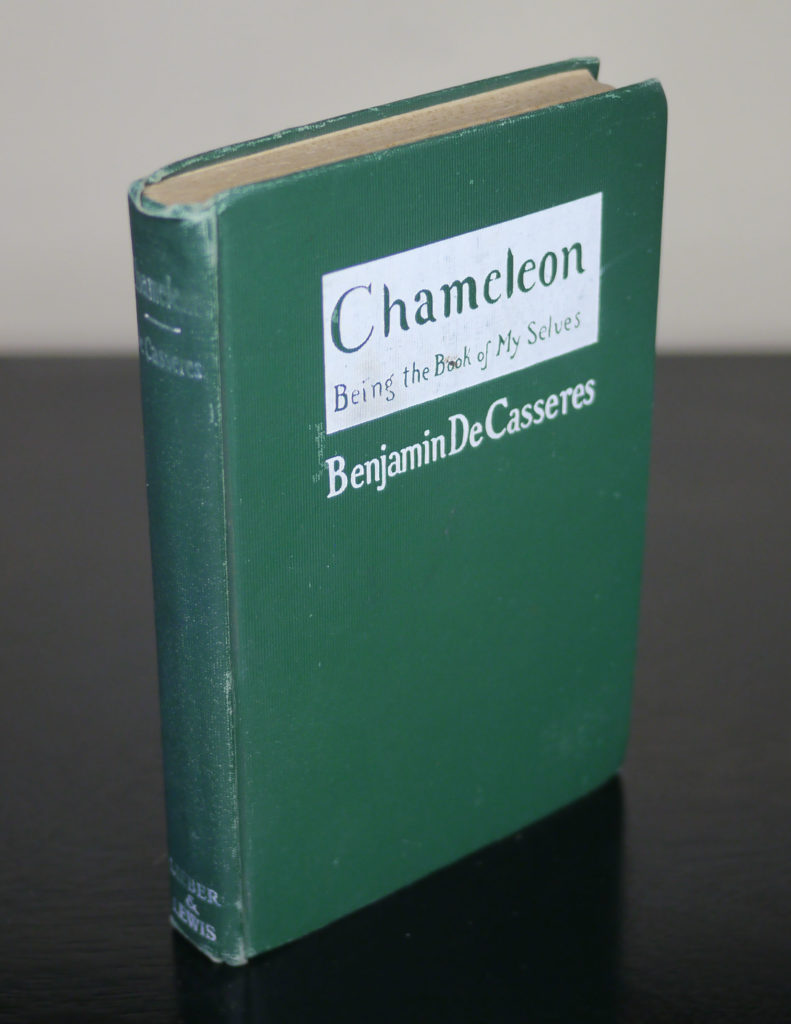 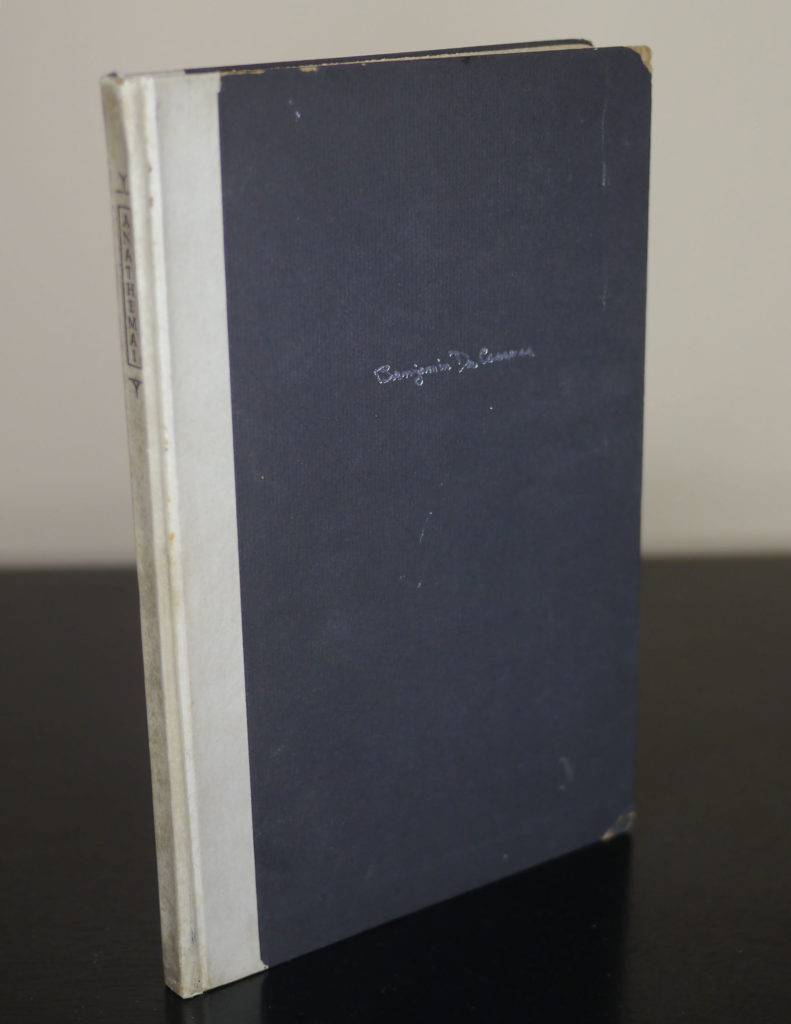 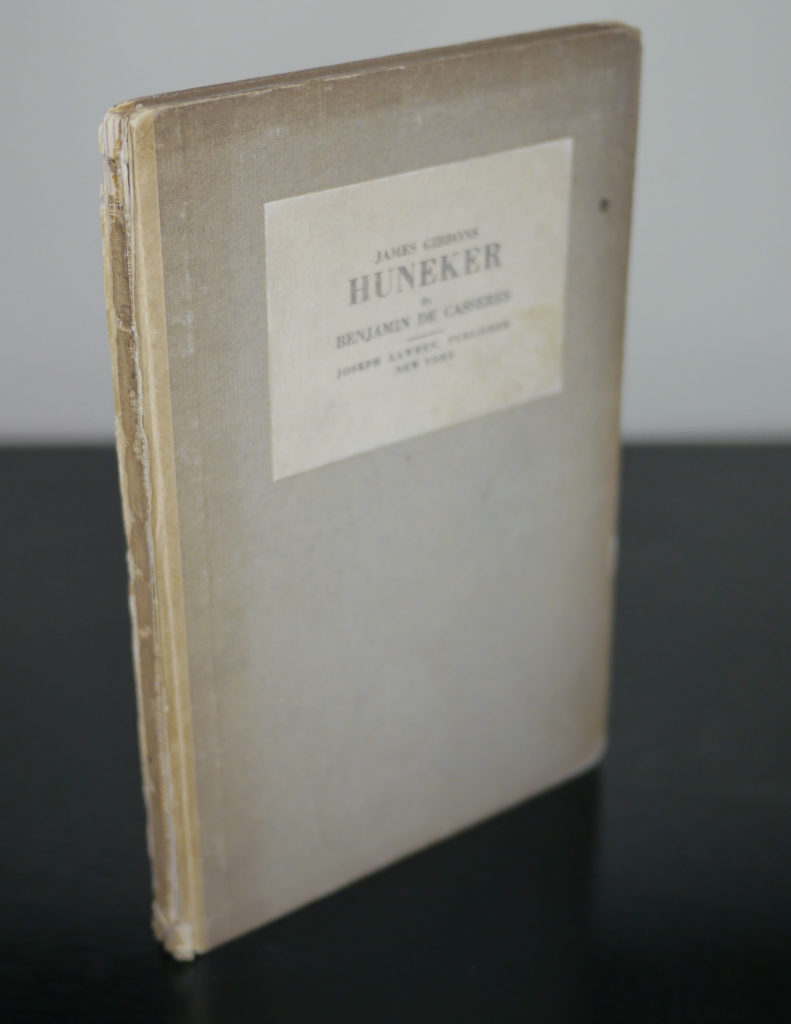 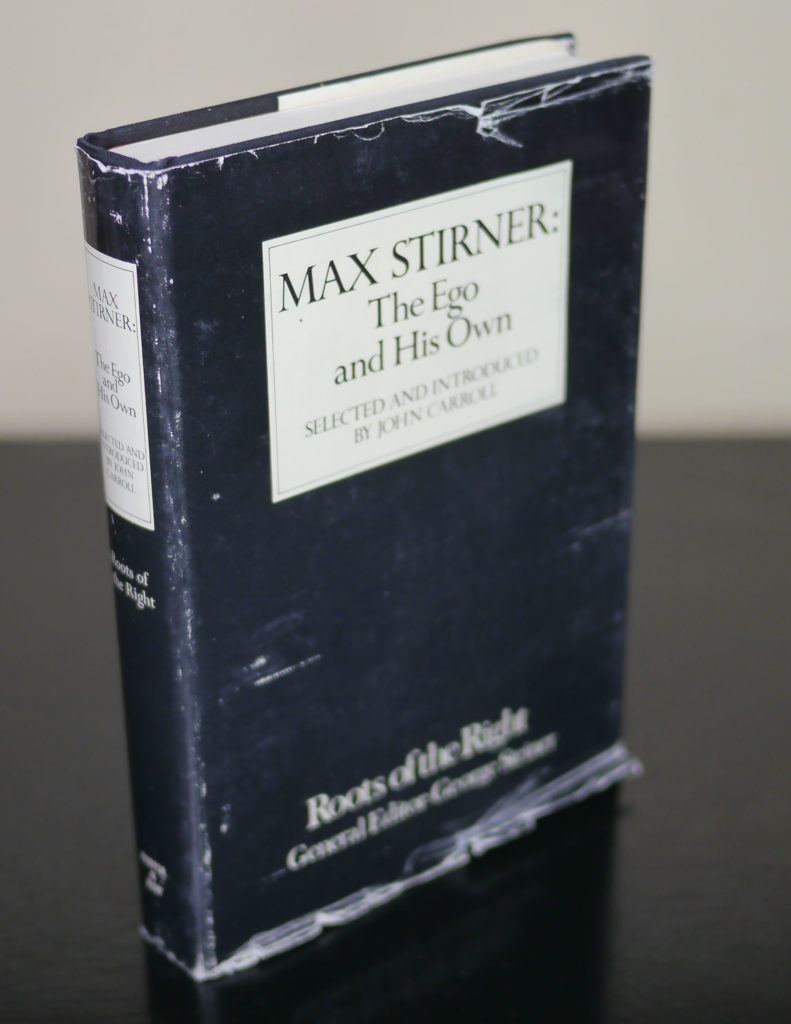 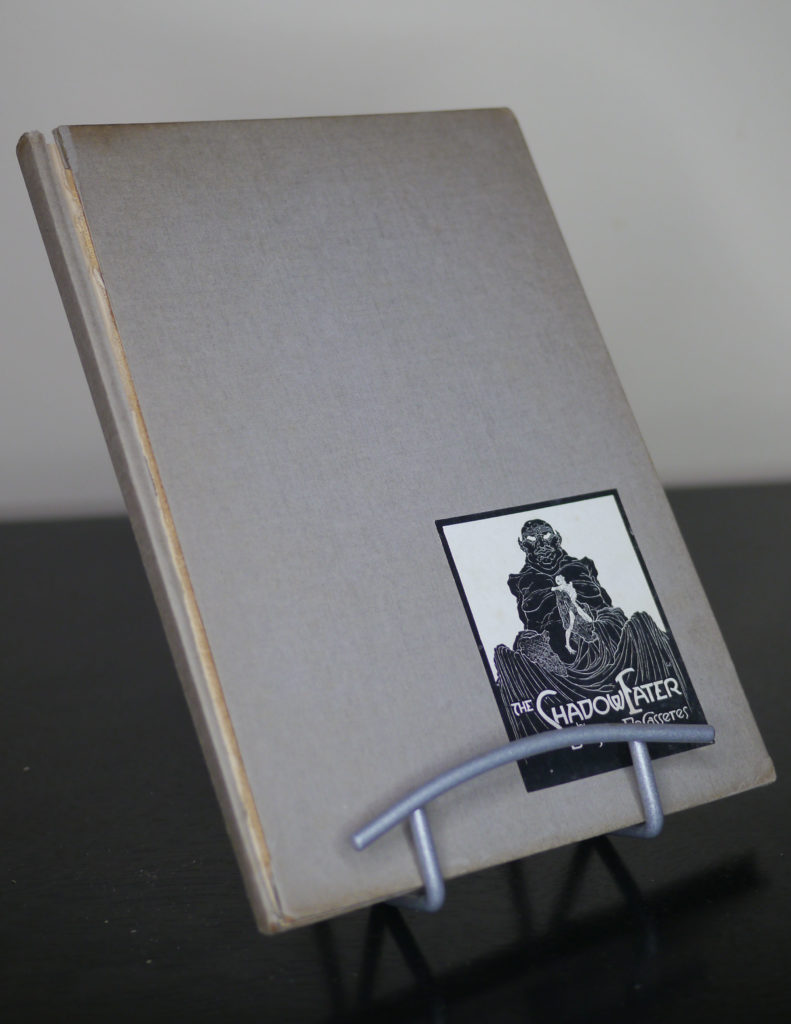 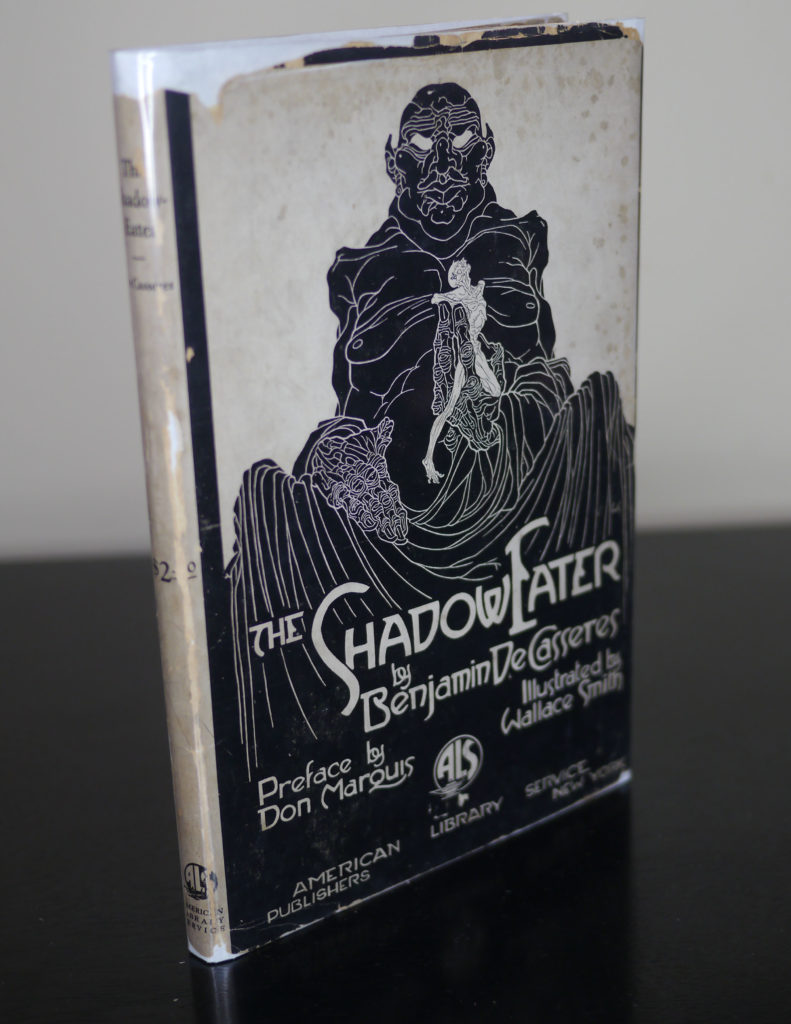 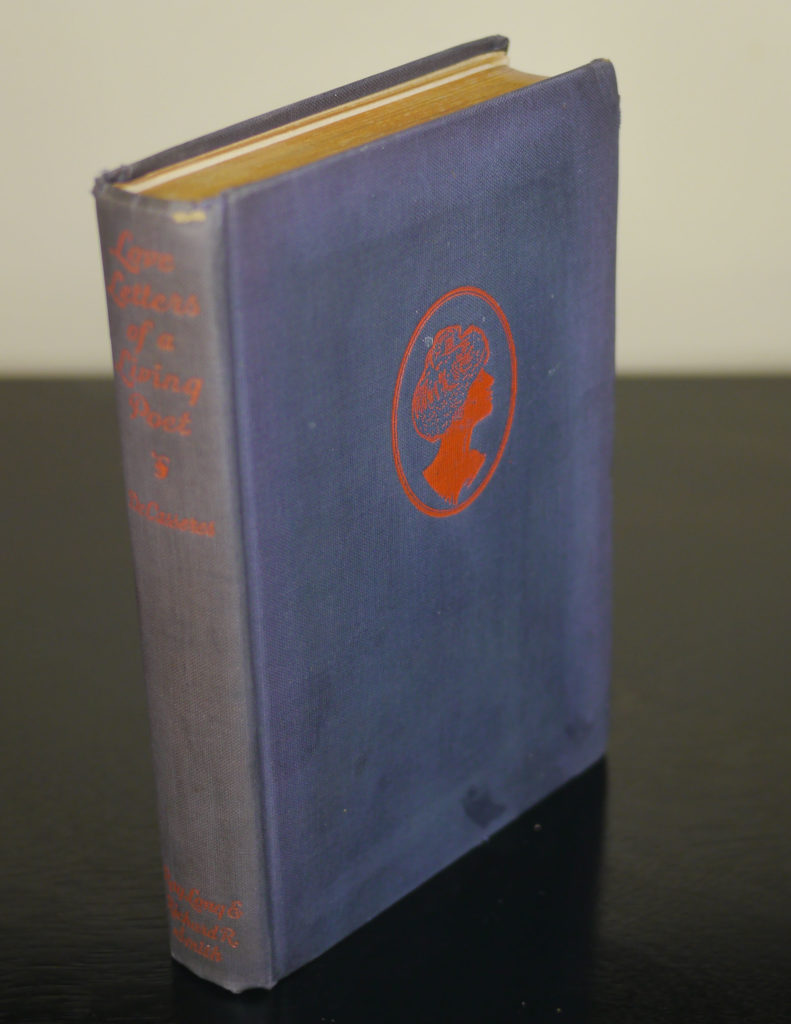 Before The American Mercury, there was The Smart Set. Wikipedia says: “The Smart Set was an American literary magazine, founded by Colonel William d’Alton Mann and published from March 1900 to June 1930. During its heyday under the editorship of H. L. Mencken and George Jean Nathan (1914-1923), The Smart Set offered many up-and-coming authors their start and gave them access to a relatively large audience. Its headquarters was in New York City….
…the magazine featured works by Edna St. Vincent Millay, Theodore Dreiser, Aldous Huxley, Sinclair Lewis, Eugene O’Neill and Dashiell Hammett, among others.”
I have subsequently added Ben’s name to that list.

“A Conversation Between George Bernard Shaw and the Dictionary”- Vol. XLIV,  No. 4 – December, 1914

Fantasia Impromptu & FINIS constitute Benjamin DeCasseres’ (1873-1945) most private writing, but even then, they were intended for publication and posterity. The first is a diary-like collection of notes and reminiscences began in December 1925. The latter was professed to be “a summation of all my books, of my lifelong beliefs.”
Fantasia Impromptu was released as a series of booklets, six in total, that constitute his “intellectual, emotional and spiritual autobiography.” They are filled with ruminations on daily life, aphorisms, esotericisms, and appeals to future readers. It is appropriately dedicated to: “The Thinkers, Poets, Satirists, Individualists, Dare-Devils, Egoists, Satanists and Godolepts of Posterity.”
FINIS is his final work, appropriately enough, and consists of three essays and a “hymn”, all previously unpublished. The one focus of all of these pieces is Oblivion. Though he states in his introduction is was not necessarily meant to be his last work, he died before it was published, and his wife Bio prepared an introduction and included a poem of dedication. FINIS was released as a booklet the year of his death and has never been reprinted before.

Discover of Laundry Tickets Reveal Tragedy of Descendant of Spinoza

The recent discovery of a package of laundry bills, invoices and paper bags on which were scribbled a great number of poems, brings to light the life and death of the one of the last two descendants of Benedict de Spinoza, the great Dutch philosopher and descendant of Simon De Casseres of London, the famous wealthy merchant who was the close friend of Oliver Cromwell. The poet was Walter DeCasseres, born in Philadelphia in 1881, and who committed suicide by drowning in February 1900. His body was recovered by workmen at the foot of the Arch street wharf in Philadelphia five weeks afterward. He was identified by a library card found in his pocket. DeCasseres committed suicide for purely philosophical reasons. He has been called the “American Thomas Chatterton,” because like the English lad he committed suicide at an early age and also wrote great poetry. When the manuscripts were submitted to Professor Leonard Charles Van Hoppen, formerly Queen Wilhelmina professor of Dutch Literature at Columbia University he declared that the poems of DeCasseres are superior to any poems written by Poe, Keats, Shelley or Blake at that age. The rediscovered poems, which are published today by Seven Arts, under he title of “The Sublime Boy,” reveal similarities to the mournful mysticism of Edgar Allan Poe and the world weariness of the old testament poet who cried “Vanity of vanities, all is vanity.” Whereas Thomas Chatterron committed suicide for physical reasons–because he was starving–Walter DeCasseres was a spiritual suicide, who had a contempt for life and a horror of what se saw on this planet, although he was in perfect physical health, had a home, a loving family, and a good position in the proofroom of the Philadelphia Press, where he was a copyholder. DeCasseres’ poems were written between his sixteenth year and the time of his death at 18 years and nearly siz months. They were only recently found by his brother, Benjmin DeCasseeres. Many of them were only deciphered with the greatest trouble and after the lapse of considerable time. They were scribbled — sometimes in ink, sometimes in pencil–very carelessly on the first pieces of paper that come to hand–sugar bags, backs of bills and torn bits of white paper.

One of the natty drinks of the moment is a pink concoction, served in small tumblers and of a melon pink coloration with trimmings of sliced fruit. It is called a “Ward Eight” and is simply a whiskey sour–Ben deCasseres’ favorite tipple–with a pony of grenadine instead of the customary powdered sugar. It is said to have gotten its name from the point of origination–the 8th Ward in Boston, Mass.

Another high-powered concoction was Joel’s Blue Moon cocktail, the ingredients of which no one seemed to know bu Joel and Ben DeCasseres, and they would never tell. when mixed it was a Prussian blue and had a velvety chestnut taste.

END_OF_DOCUMENT_TOKEN_TO_BE_REPLACED

After dredging through the New York Times online archives I’ve produced a list of all of the found Letters, Articles and Reviews published. Some of these were printed in Mirrors of New York, and many will be included in a future collection of DeC’s writing about New York to be published by Underworld Amusements.